The Four Headlines of the Apocalypse

Six years ago this month, the author, editor and publisher of the now iconic Downfall – How Rangers FC Self-Destructed, were putting together the finishing touches for the book before it went to print. Downfall – How Rangers FC Self-Destructed, is once again being reprinted this month. As with The Squad, Phil’s recent novel, we will be offering signed copies exclusively from our Frontline Noir Online Store .

Downfall is timeless in that while it describes the lead up to an event of 6 years ago, the liquidation of Rangers FC, it also describes the collusion between media and subject to deny facts, spin untruths, and generally breath life into the sense of entitlement that the Establishment Club had into its successor, the new Rangers. Once again the bulk of Scottish Sports media is missing in action, just as they were in years leading up to 2012.

At that time, very few people, whether journalists or punters, were denying the fact that Rangers FC had been liquidated. In fact, the front pages of the most widely-read newspapers had banner headlines to that effect. 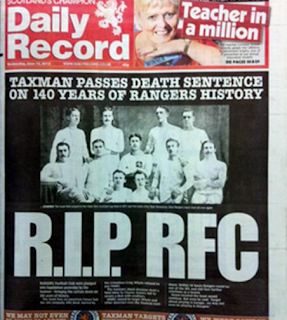 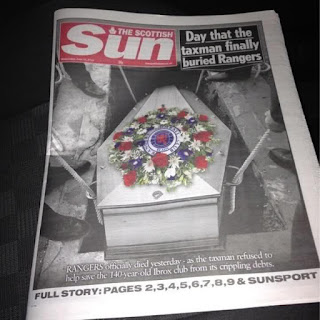 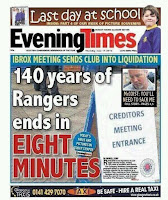 This was an outbreak of accurate reporting, which was soon contained though, due to the inability of many to accept the truth. Such was the forceful reaction of an extreme element within the Rangers support, often referred to by detractors as ‘The Klan’, that none of the newspapers above would ever dream of printing these front pages today. Not only would they never print them again, but they’d never refer to these pages, not even in the context of saying, “Look, we were wrong, Rangers didn’t die. They are still alive. These front pages should never have been printed as they were inaccurate.” The term Social Amnesia can be used to describe a repression of memory by a group of people. This accurately describes the current repression of The Four Headlines of the Apocalypse.

Downfall, then, can not only apply to the downfall of Rangers FC, but also to the downfall of Scottish Sports Media as an independent, objective, fearless collective. As an entity, Scottish Sports Journalism became a circus, reducing itself to performing gravity-defying acts of intellectual contortion as it simply sought to transcribe the New Story without ever calling it the New Story as that would necessitate reference to the Old Story, which in turn would undermine the New Story. The theory, of course, was that if the New Story was repeated again and again then the punters would forget the Old Story, the one on the front pages above.  Even on sports radio shows in Scotland, no one, not the journalists or the phone-in callers, are allowed to mention Newco, Sevco, The New Rangers, The Old Rangers. The few who have done so have been pilloried and, in the main, undefended publicly by their peers. When The Mob, or The Klan (call that unscrupulous element of the Rangers support what you will), get their metaphorical boots into “errant” journalists who committed the transgression, deliberately or inadvertently, of referencing the facts that dare not speak their name, look how few of their fellows, their comrades, came out fighting and publicly challenged the lynchers.

How many said #WeAreAllAngelaHaggerty, #WeAreAllJimSpence #WeAreAllGrahamSpiers and others? They were few and far between. Perhaps they were outraged privately and got their tuppence worth in behind closed doors.  Fair enough. But that’s hardly confronting a mob to the point it is called out and embarrassed, is it?

Of course, suggesting every Scottish sports journalist failed in his/her duty to report the truth would be an error. Of course, there were several journalists who came out this whole Orwellian period with their integrity intact, their courage all the more demanding of respect because they were the exceptions.  But the vacuum left by the absence of real journalism in the wake (in every sense) of The Rangers Story played a big part in propelling Social Media and while some in corporate media look down their noses at “citizen journalism”, often citing “grammar and spelling”, they would do well to remember, had it not been for journalism failing at a critical juncture in Scottish sporting and social history, then punters like me would have been happy to remain “mere consumers of news”. But, when you smell a rat and see that the rat-catcher is fast asleep in a succulent lamb-induced food coma - or at least pretending to be - it’s natural to stop consuming and try to find out independently what is going on. You don’t need to be a vegetarian like me to not like this brand of lamb. You just need taste.

With notable exceptions, Downfall was not reviewed in the corporate media. One journalist I spoke to, and who I knew to be a decent, sane guy, said, “Why invite a barrage of vile abuse, and get stalked by mental cases.” Several journalists refused to even read it while at the same time criticising it, another unseemly intellectual contortion, rendering their views on the book about as pertinent as the those of the Psychic Reviewers, Klanites who’d reviewed the book maliciously on Amazon before the book was even finished, never mind released. Noo, that was clever.

We shouldn’t complain. All this furore helped make Downfall a bestseller in Scotland. Book stores sold it very well despite some having to sell it under the counter due to fear of staff being harassed by less than well-wishers who’d intermittently berate staff for stocking the book. Both of these facts became added to the list of Facts Which Dare Not Speak Their Name.

The bottom line is that you have to ask why Downfall is still the only book on the demise of Old Rangers. It was one of the biggest sporting stories in Scotland’s history. And yet the silence on the event is deafening, even in 2018. We will continue to reprint Downfall, if only to enable the echo of history to break through that wilful silence.